'We have been dreaming of a history of the world'. Here it finally is.
'Breathtaking'

Antoine Courban
'Astonishing breadth of vision'
'Captivating...it forces us to think about history in a different way. Unputdownable'

Guri Hjeltnes
'Frankopan lifts the past so that it stands alive in front of us'
'Full of surprising details and perspectives. Essential for anyone interested in history and geography over the centuries.'

François-Guillaume Lorrain
Peter's book will means that 'France is going to discover the joys of connected history'
'An treasure trove of curiosities...which will change perspectives.'

Robert Gegvold
'Arresting....compelling....One comes away from this book convinced that the multidimensional history of the silk roads deserves a central place in an understanding of the roots of the modern world.

'Anyone who wants to understand the world must read Frankopan'

Stefan Weidner
'As well as being a highly gifted writer and a wonderful historian, Frankopan is also extremely courageous.'
'This is an instant classic, all but a masterpiece'

Thomas Schmid
'Monumental and bold. It is impossible to do justice to the exhilarating, rich ride through the centuries.'
'This is a book that opens ones eyes'

Sadanand Dhume
'Frankopan shows that even in ancient times trade and culture bound distant people together....One of [his] gifts is the ability to draw unusual connections across his vast canvas...
'A rare book that makes you question your assumptions about the world.'

Colin Thubron
'This is deeply researched popular history at its most invigorating'
'The sheer abundance of Frankopan’s information can become an omnivorous pleasure, and its details add color and particularity....to his text'
'It is a brave, subtly personal project of inspiring ambition and epic scope, full of unexpected connections.'

'Drawing on prodigious sources...Frankopan weaves together his many narrative strands with verve and impressive scholarship....A vastly rich historical tapestry that puts ongoing struggles in a new perspective'

Henry Porter
'Monumental…prodigious…astonishing. Frankopan is an exhilarating companion for the journey along the routes which conveyed silk, slaves, ideas, religion, and disease, and around which today may hang the destiny of the world’

'Many books have been written which claim to be a New History of the World. This one fully deserves the title.'
'It is difficult...to do justice to a book so ambitious, so detailed and so fascinating'

William Dalrymple
'Fearless and brilliant'
'This is history on a grand scale, with a sweep and ambition that is rare'

'Brilliant threads....this is, to put it mildly, an ambitious book'
'Bold... a history of the world that shunts the centre of gravity eastward'
'Frankopan writes with clarity and memorable detail'

Justin Marozzi
'Magnificent...swashbuckling...re-balances fundamentally our traditional understanding of history'
'This is full-blooded history written with verve and precision'

William Dalrymple
'A remarkable book on many levels, and one that anyone would have been proud to write: a proper historical epic of dazzling range, ambition and achievement'

Philip Seib
'Superb...'Peter Frankopan is an exceptional storyteller'
'Frankopan’s book will be indispensable to anyone who wants to make sense of this union of past and present'

'A Herodotus of the 21st century'

'Lives up to its claim to be a new history of the world because of its geopolitical paradigm shift....The Silk Roads is a fascinating read, written with flair and the result of serious scholarship

'Dazzlingly rich and accessible'
'A startling and brilliant perspective on events that may once have been familiar - and plenty that aren't.'

'A dazzling piece of historical writing'
'A beautifully constructed web of anecdotes and insights, backed up by an impressively wide-ranging scholarly apparatus of footnotes drawing on works in multiple languages'

Srinath Ragavan
'Majestic...captivating...'
'With extraordinary erudition and a vivid style, [Frankopan] takes us on a dazzling tour....drawing on a breathtaking range of sources'

Robert Irwin
'Rethinks world history and to relocate the central developments in that history some way east of Europe...[making] bold connections are made between divergent cultures...based on astonishingly wide and deep reading and in all areas draws  on the latest research...full of vivid and recondite details'

Vikas Datta
'Meticulously-arranged but always interesting...there is much to inform and illuminate, and patterns we may have never suspected are revealed....Masterful and engrossing'

'A fascinating history of the world driven by a narrative connected by a convincing theme: the influence of the great Asian long-distance land routes...World history on a grand scale'
'A scintillating read....'

Averil Cameron
''Beautifully constructed, a terrific and exhilarating read and a new perspective on world history'.
History Today, Books of the Year

John Stepek
'Frankopan handles his material deftly and has an eye for telling details...a clear theme is that globalisation is not a new phenomenon...This is essential reading.'

'The best account of Central Asia's intellectual legacy we have'

Peter Gordon
'Frankopan has recast world history—culture, politics, religion, economics—as both a single consistent narrative and one that is not centered around the development of Western civilization.'

'If one had to choose an up-to-date volume from which to glean an overview of world history, this might well be it.'

'Frankopan's research is impeccable...There are a myriad themes and threads, each a fit subject for a book [makes the book] exhilarating roller-coaster ride.'

Matthew Price
'Exhilarating...plenty of bang for your buck.'
'Here is a work for our networked age...a bracing wake up call.'

Lucy Inglis
'Almost all historians hope to offer their readers a different view but few historians could, and perhaps fewer still would, dare to write a new history of the world. Peter Frankopan...began as a young man with a map and has done what he set out to do.'

'At a time when the Chinese, under their 'one belt one road' policy are building a new Silk Road to the Mediterranean, this is essential reading'

'Most Notable Business Books' of 2015

Rolf Brockschmidt
'Frankopan is not only an outstanding historian who has worked on a vast array of sources, but also a gifted narrator'. 'A wake-up call...and crucial to understand the future.'

'a breath-taking and addictively readable study...that inverts received wisdom'
'A compelling political, economic and social history that is as much about how we will live as how we once did...a fascinating tome' (World Travel Guide - Top Holiday Reads)
'Full of intriguing insights and fascinating details' (Observer)
'The author's gift for vividness is reminiscent of Jan Morris, while his command of revealing facts or fancies is not far short of Gibbon's' (Literary Review)
'Bold and ambitious' (Tablet)
'Timely. it deserves a place by the library fireplace' (Country Life)
'It's the details that win it. Did you know that Attila's Huns wore coats made from mouse skin? '(Sunday Express) 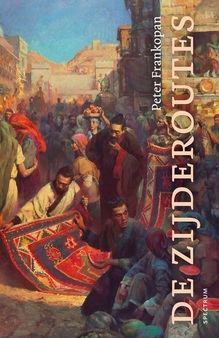